Analysis of Commonalities: The Srimad Bhagavad Gita and Plato’s Apology 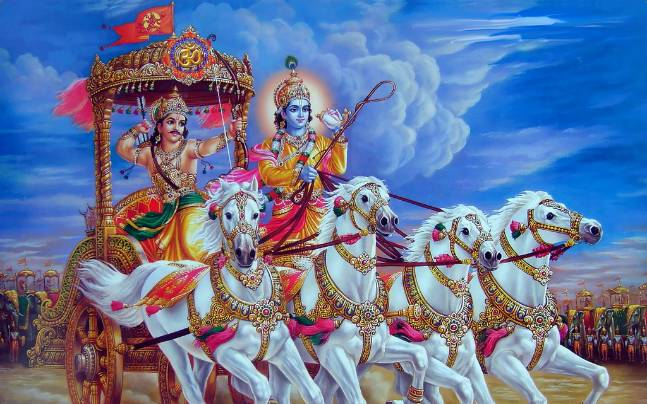 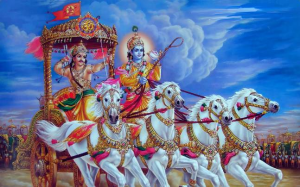 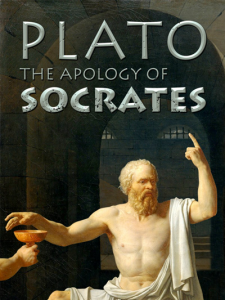 The Srimad Bhagavad Gita, contains Arjuna’s battle story against his evil cousins and uncles. Arjuna does not want to fight them because they are his family members. Lord Krishna, Arjuna’s guru and charioteer explains dharma and karma, or virtue and righteousness, to Arjuna. Krishna tells Arjuna that his duty includes eradicating evil — his immediate and extended family, cousins and uncles whom he dearly loves but must execute — leading Arjuna to a true and virtuous life.

“Perform your obligatory duty, because action is indeed better than inaction. Even the maintenance of your body would not be possible by inaction” (Vyasa 3.08).

The Srimad Bhagavad Gita’s paramount objective includes dharma or righteousness and virtue. Similarly, Plato’s Apology involves Socrates’s defence against Meletus’s false accusations, in court. Meletus accuses him of corrupting the youth of Athens and impiety. Socrates uses the defense, that he simply perceives truth and desires the quality of virtue. Parallel to Krishna’s motive, Socrates wants to explain to his audience the importance of living a virtuous life. “Are you not ashamed of your eagerness to possess as much wealth, reputation, and honors as possible, while you do not care for nor give thought to wisdom or truth, or the best possible state of your soul?” (29e-30a). Socrates believed that finding truth consists of finding the base of all things; major concepts e.g. love, hatred, piety, and truth. Socrates believed that virtue can be possessed by pursuing truth. Socrates’s idea of virtue goes along with Krishna’s idea of righteousness or dharma. Socrates and Krishna conclude with essentially the same concept.

The world contains numerous egoistic human beings. A human’s materialistic qualities cause the downfall of a person, it makes the wise unwise. The Srimad Bhagavad Gita states that a wise person should attain liberation from self-conceit.

“The man of impure intellect, who on account of his perverse understanding looks upon himself as the sole agent, he does not see (truly). He, who is free from the egoistic notion of ‘I-ness’; and whose mind is not tainted even—though he kills these people, he neither slays nor is he bound” (Vyasa 18.16-17).

Krishna states that egoistic people or people that know that they know something are foolish and unwise. A person completely free from all bondage to materialistic desires has no ego.

“Those who are free from vanity and delusion, who have overcome the evil of attachment, who dwell constantly in the self and God, who are freed from the desire to enjoy the senses, and are beyond the dualities of pleasure and pain, such liberated personalities attain My eternal Abode”(Vyasa 18.5).

Krishna touches on three concepts of Hinduism: “karma” (deeds), “moh” (attachment), “punarjanma” (reincarnation), and “moksha” (self-liberation). “Moh” means attachment to the materialistic things. According to Hinduism, everyone attached to worldly items finds it very hard to eradicate their bondage with these items. “Punarjanma” means the re-birth of a soul numerous times on the basis of “karma,” good and bad deeds, until one achieves “moksha” or the soul’s liberation. Krishna said that after one has overcome “moh” to worldly things they can attain “moksha” from the cycle of “punarjanma.” The Apology encompasses Socrates’s similar ideas about ego and foolishness, he gives examples of politicians, poets, and craftsmen. Socrates questioned these people in a quest to find one wiser than him, and if they are unwise then he made them realize it. Socrates questioned politicians, and when he said that they are unwise, they began to dislike him. Next he questioned poets, he saw they knew nothing, poetry was merely a talent for them. When Socrates met the craftsmen, he saw they knew things that Socrates did not know. Although they proved to be skillful, they thought themselves to be wise which took over their skills, making them unwise. Socrates concluded that, “This man among you, mortals, is wisest who, like Socrates, understands that his wisdom is worthless” (23b). After the pursuit of a person wiser than he, Socrates concluded that a person can only be wise without conceit. Socrates also believed that human wisdom is worthless and that God is wise. Thus, one should believe that their wisdom is completely futile and by doing so, one can obtain true wisdom.

Hinduism states that the soul cannot be harmed and it takes different births. Socrates similarly believed that after death, the soul does not die. Krishna states that the soul’s quality comprises of an eternal entity that takes new forms. Arjuna has to kill his evil relatives and all who supported evil and injustice, Krishna tells him that wise people do not mourn over the dead because their soul never dies.

“The soul is neither born, nor does it ever die; nor having once existed, does it ever cease to be. The soul is without birth, eternal, immortal, and ageless. It is not destroyed when the body is destroyed” (Vyasa 2.20).

“O Parth, how can one who knows the soul to be imperishable, eternal, unborn, and immutable kill anyone or cause anyone to kill?” (Vyasa, 2.21).

“As a person sheds worn-out garments and wears new ones, likewise, at the time of death, the soul casts off its worn-out body and enters a new one” (Vyasa 2.22).

“Weapons cannot shred the soul, nor can fire burn it. Water cannot wet it, nor can the wind dry it” (Vyasa 2.23).

Reincarnation, the soul’s rebirth, taking a new form. Every being reincarnated into a different form after each life. This cycle continues until the being attains “moksha.” Krishna says that the immortal soul, has many mortal forms. He tells Arjuna that when a person dies his immortal self has left, not his essence or soul. Thus if Arjuna fights his evil relatives and all their supporters, their souls will be unharmed if they die. Socrates similarly believes that the soul is superior to the body. Given a death sentence, Socrates states that death cannot harm him, but will harm the doer because of the unfair trial.

“Neither Meletus or Anytus can harm me in any way; he could not harm me, for I do not think it is permitted that a better man be harmed by a worse: certainly he might kill me, or perhaps banish or disfranchise me, which he and maybe others think to be great harm, but I do not think so. I think he is doing himself much greater harm doing what he is doing now, attempting to have a man executed unjustly” (Plato 30d).

Socrates believed that the soul’s injury causes greater damage than physical injury. He says that his death will not harm his soul nor his body. Socrates did not pay much heed to his subsequent death, but the harm his accusers will undergo. Socrates touches on another Hindu concept called “karma” which means the cause and effect of deeds. He was accused groundlessly and was executed unjustly. Socrates said that his accusers’ souls will face adversities because of their unethical “karma.” Krishna and Socrates both talk about the eternal soul and how it can only be harmed if the doer performs an immoral deed.

The ultimate differences between the Apology and the Srimad Bhagavad Gita is that Arjuna listened to Krishna and agreed to fight the battle against unjust people, but the Athenian court did not understand Socrates’s reasoning and instantly executed him. Krishna also already knows truth and simply explains it to Arjuna, while Socrates still pursues truth and simply tries to get the Athenian court to pursue it with him. Arjuna stationed center battlefield tells Krishna that he perceived Krishna’s proposition of action, justice vs. injustice, he follows Krishna’s commands, and wins the battle against evil.

“‘Have you heard this gospel attentively, O’ Arjuna? Has your delusion, born of ignorance been dispelled?’ ‘O’ Kṛṣṇa, my delusion is destroyed and I have regained my memory (knowledge of the self) through your grace. Now I am totally integrated and free from all doubts. I shall act according to Thy word’”(Vyasa 18.72-73).

Krishna calls Arjuna “ignorant,” which means that Arjuna did not see the evil in his relatives on the battlefield, he was naive and was not ready to accept them as unjust. Arjuna was blinded by a curtain of “moh” and false emotions. Arjuna’s relatives also possessed “ignorance” but in the form of pride, ego, and material desires. All of these concepts deter a person from fulfilling his or her duties. Socrates would define ignorance somewhat similar to Krishna’s definition. He would say that ignorance has to do with hubris or pride, and an ignorant person knows about his or her knowledge which makes them foolish. Although, a wise person does not know their knowledge. Krishna’s compelling explanation enlightens Arjuna on dharma, whereas Socrates successfully stultifies his audience, the Athenian court. Socrates’s monologue’s third part contains his final words to the Athenian court. “Now the hour to part has come. I go to die, you go to live. Which of us goes to the better lot is known to no one, except the god” (42a). Socrates believes that only God knows what happens after death, so he simply states that he knows nothing, and he only pursues the truth. The Athenian court’s ignorance causes them to be unable to process the depth of Socrates’s reasoning, their one track mind leads to the execution of the renowned philosopher Socrates. The difference between the Apology and the Srimad Bhagavad Gita involves the result of both the dialogues and the difference of understanding of truth between Socrates and Krishna.

The Srimad Bhagavad Gita and Apology both incorporate similar concepts including: virtue, ego, and the soul. Two literary works from two completely different historical periods encompass the same philosophical ideas. Both were dialogues, and the main speakers, Krishna and Socrates, strived to influence their audience, Arjuna and the Athenian court. Unfortunately, the dialogues had different results, Arjuna heeded Krishna’s commands and won the battle against evil, but the Athenian court nullified Socrates’s reasoning by executing him. The speakers also have dissimilar truth’s comprehension. In the end, The Srimad Bhagavad Gita and the Apology both contain the same knowledge worthy of praise.

2 thoughts on “Analysis of Commonalities: The Srimad Bhagavad Gita and Plato’s Apology”