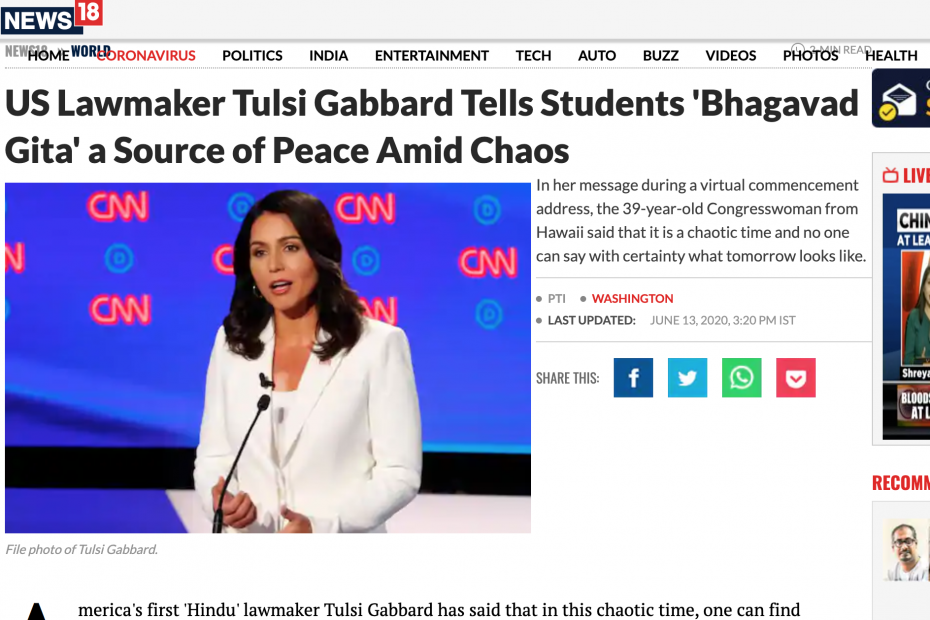 HSC’s Hindu Commencement on June 7 went better than we could have imagined. Students from all over the country listened eagerly to Tulsi ji, Professor Kak, and all of the addresses made by HSC students. Young Hindu students who want to get involved have overflown us with their excitement.

We’ve also certainly seen a lot of press coverage for the event. Most of it is quite positive on Tulsi ji’s messages from the Bhagavad Gita. However, we want to make sure we always highlight and address Hinduphobia when it arises.

News18 posted the following tagline for the event and opened the article with the same sentence, as seen in the linked image: America’s first ‘Hindu’ lawmaker Tulsi Gabbard has said that in this chaotic time, one can find certainty, strength, and peace in Bhagavad Gita 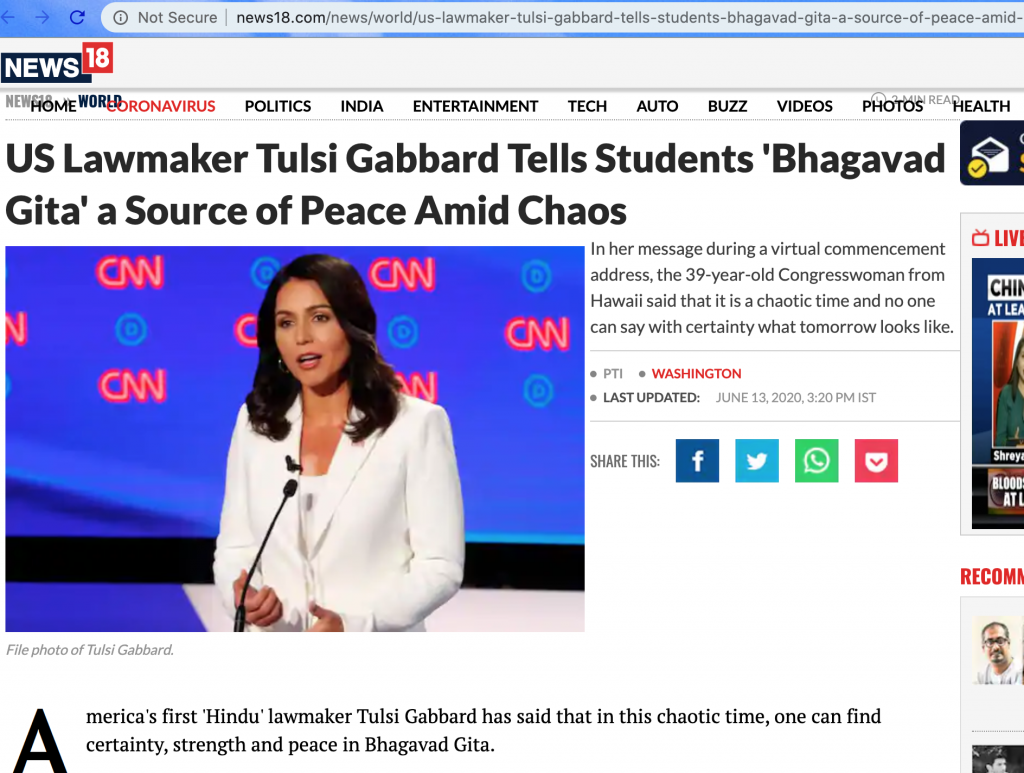 Notice the air quotes around the word ‘Hindu’. We went back and forth to rationalize what their purpose could possibly be. Does this agency consider ‘Hindu’ a dirty word? Is it being used as an asterisk against Tulsi ji’s identity as an American Congresswoman? Are they questioning if she is actually a practicing Hindu?

Some facts to consider:

So, how does an Indian news channel decide to put only this word in quotes?

This is what Hindus deal with across the world – and more-so in India than other countries, where the media and Bollywood culture make it seem surprising for Hindu culture to be anything but an ancient relic. Even scarier, are they suggesting that Tulsi ji – one of the most ideal leaders of the Hindu American community – is not a Hindu?

Tulsi ji has repeatedly faced this skepticism, from news outlets questioning whether she is actually a Hindu. A prominent example is this deep interview by NY Magazine during her 2020 election campaign, which explicitly put forth: “Tulsi calls herself Hindu, the first Hindu member of Congress, in fact, though the group in which she appears to have grown up does not identify as Hindu.” (https://nymag.com/intelligencer/2019/06/tulsi-gabbard-2020-presidential-campaign.html). Many news sources have gone one step further, taking liberty to fetishize her Hindu beliefs as “cultish”. The same article above follows this Hinduphobic logic.

If you thought Indian media would be a harbinger for Hindus globally – think again. Remember that news about Hinduism from India will be distributed globally. These biases and Hinduphobic tendencies are manifested without second thought.