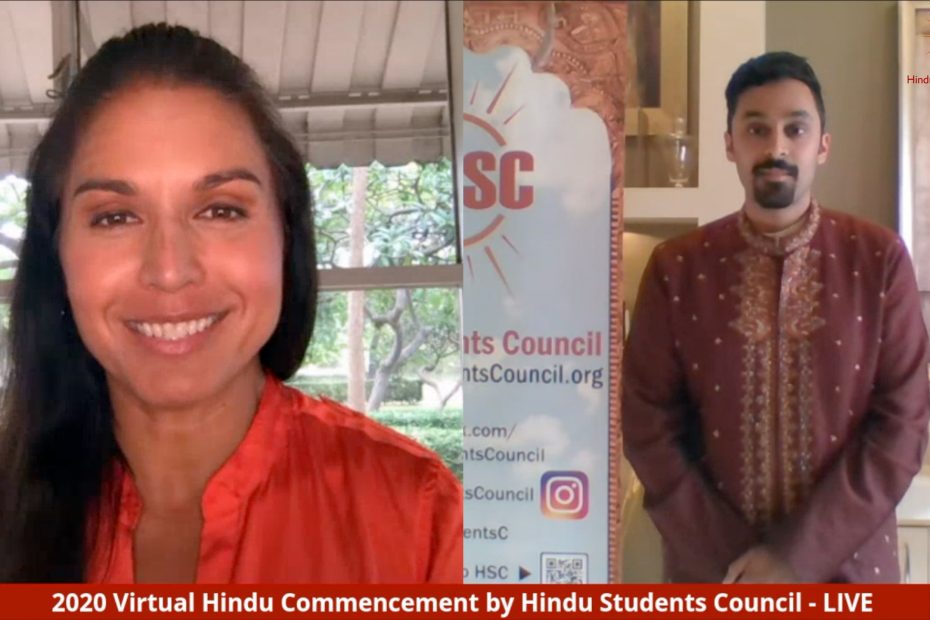 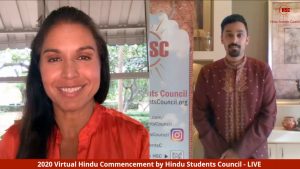 The Hindu Commencement, held on June 7th, drew thousands of viewers on Facebook and Youtube Live, all coming together in solidarity during the ongoing COVID-19 crisis. Hundreds of graduates from the United States, Canada, United Kingdom, India and Australia attended to commemorate their graduation in a unique way – by celebrating their shared Hindu values.

“As you think about this new chapter in your lives, ask yourself ‘what is my purpose in life?’ It is a deep question that if you can recognize now that your purpose is to serve God and God’s children, practicing Karma Yoga, then you can lead a truly successful life,” said Congresswoman Gabbard. “Not success defined by temporary material things, trinkets, glittery objects, or accomplishments – but a deeply successful and happy life centered around service.”

As a Congresswoman, former Presidential candidate and combat veteran still serving in the Army today who confidently emphasizes her Hindu values, Congresswoman Gabbard exemplifies what it means to be a Hindu American leader.

Her Commencement Address focused heavily on themes from the Bhagavad Gita, a timeless historical text that many Hindus consider their moral framework.

“It is a chaotic time and no one can say with certainty what tomorrow looks like […] but we find certainty, strength, and peace in the practice of Bhakti Yoga and Karma Yoga taught to us by Krishna in the Bhagavad Gita,” added Rep. Gabbard. 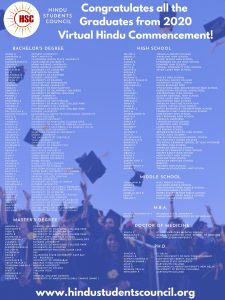 As the Grand Marshall, Subhash Kak, Regent Professor at Oklahoma State University and 2019 Padma Shri recipient, read out the names of students graduating students in the Class of 2020. “I exhort you – the graduating students – to be the leaders of the new world where education is less of the mind of a vessel to be filled with information (usually forgotten after the semester is over), and more of a flame that is lit as envisioned by our Vedic sages,” said Professor Kak.

Student speakers included HSC leadership from high school chapters and across many university campuses, including MIT, Princeton, and Stanford. The program included offerings of Hindu prayers, recitation of a traditional graduation message from the Upanishads, and a symbolic conferral of degrees to high school and college graduates.

Founded in 1990, Hindu Students Council is North America’s largest pan-Hindu youth organization. HSC is a 501(c)3 non-profit providing a safe space for Hindus on campuses all over, and is a platform for young Hindu leaders to grow. Over 200,000 students of various backgrounds have attended HSC’s programs since its founding.