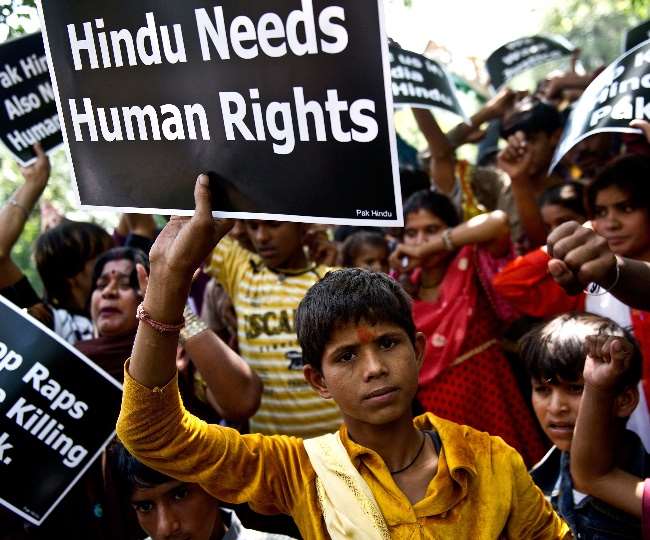 The shocking blasphemy allegation against an 8 year old Hindu boy shows that Pakistan has hit yet another low in its systematic campaign of terror against its Hindu minority. The charge carried a potential death penalty after the 8 year old – the youngest to ever be accused of blasphemy in Pakistan – was arrested for allegedly urinating in a madrassa.

The boy’s family recounted, “He [the boy] is not even aware of such blasphemy issues and he has been falsely indulged in these matters. He still doesn’t understand what his crime was and why he was kept in jail for a week.”

Pakistani authorities dropped the blasphemy charges after facing seething international pressure. However, the boy’s family and many local Hindus have fled the area seeking safe shelter. This happened after a Hindu temple in that area (Bhong, Punjab) was destroyed by an Islamist mob over the course of hours; the police and local authorities did not intervene to stem the violence. “We have left our shops and work, the entire community is scared and we fear backlash,” a member of Bhong’s Hindu community revealed from an undisclosed location. “ We don’t want to return to this area. We don’t see any concrete and meaningful action will be taken against the culprits or to safeguard the minorities living here.”

This is a pattern of Hinduphobia that we have witnessed in Pakistan where blasphemy laws and the mere public expression of Hindu identity continue to pose a severe threat to the safety and well being of Pakistan’s dwindling Hindu minority. (See: 1, 2, 3, 4, 5, 6) The State has directly overseen such discrimination. Last year during the pandemic, the Pakistani government withheld COVID food aid from its Hindu and Christian minorities, leading to forced starvation.

This most recent incident underlines that the worst affected by Pakistan’s continual silence and complicity in these bigoted atrocities are Hindu children. Rape and forced conversions of young Hindu women in Pakistan has become alarmingly commonplace. Just this week, in Sindh, Pakistan, a 15 year old Hindu girl, Chatro, was abducted and raped by Muhammad Ali Nawaz and his accomplices. Ironically, this atrocity occurred on Pakistan’s National Minorities Day.

As Hindu students in North America, we have a special responsibility to speak out when those in our generation are being victimized. Hindu Students Council stands in solidarity with Pakistani Hindus. We urge the international community, particularly the governments of the United States and Canada, to recognize and hold Pakistan accountable for its human rights violations against Hindu minorities. We encourage HSC students and community members to take action in the following ways: