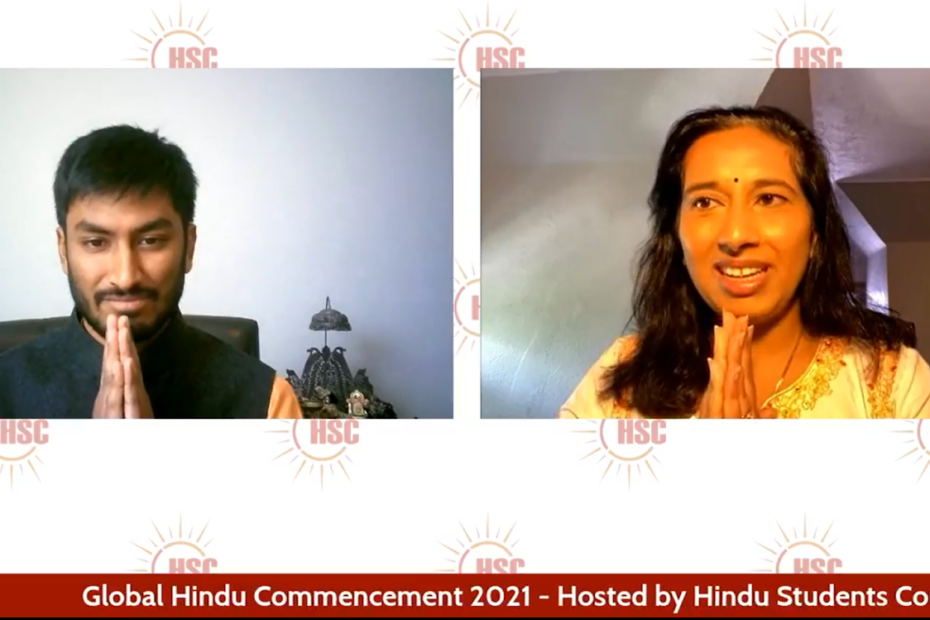 Aerospace engineer and HSC Alumna Dr. Swati Mohan delivered a historic Commencement Address to the Class of 2021 during Hindu Students Council’s (HSC)’s virtual Hindu Commencement, with Amar Shah serving as the ceremony’s Grand Marshall. As the second ever global Hindu Commencement, the event included a strong message of optimism and encouraged graduating students to embrace their Hindu identity on their life journey – both in their professional and personal life.

“To achieve true success, you must first know yourself and your own path,” said Dr. Mohan, addressing the graduating class and all attendees.

Hindu Commencement, held on June 6th, drew hundreds of viewers on Facebook and Youtube Live, all coming together in solidarity during the ongoing COVID-19 crisis. Graduates from Australia, Canada, India, Malaysia, Mauritius, New Zealand, Trinidad & Tobago, the United Kingdom, and the United States attended to commemorate their graduation in a unique way – by celebrating their shared Hindu values.

Dr. Mohan’s Commencement Address focused heavily on her experience growing up as Hindu in the West and how HSC helped her embrace her Hindu identity.

“For someone who had grown up enmeshed in Hindu and Indian culture, forming HSC at Cornell was when I decided for myself that I was a Hindu and what that meant for me. In HSC, we brought together people who came into Hinduism from all different backgrounds. Seeing these people own up to who they were was wonderfully inspiring. So when I put that Bindi back on, this time I was doing it for myself,” Dr. Mohan added.

Dr. Mohan, an aerospace engineer and the Guidance and Controls Operations Lead on the NASA Mars 2020 mission, was selected to give this historic speech as a proud Hindu American and an inspiration to many young Hindus. As a former HSC Cornell University Chapter Officer who continues to confidently emphasize her Hindu values, she exemplifies what it means to be a Hindu American leader.

Students graduating in the Class of 2021 at all levels of education had their names read during the ceremony by Shri Amar Shah, Chaplain at Northwestern University. The event was open to the international community so that parents, family, friends, and the broader community could participate in the celebration.

Shah provided an analogy to graduating students regarding the importance of practicing Sadhana to reach one’s goal of Mukti. “Our Hinduism is like a buffet. We have many different traditions- pooja, jhapa, chintanam, chanting, but not every course is for everyone. Instead, you take up that specific Sadhana which is conducive to you, but it is important to take up a Sadhana. Because, if we are going out into the world, and saying we represent Sanatana Dharma, we represent Hindu culture, but we’re not practicing, who are we then?” said Shah.

HSC also recognized several awardees for their work towards Hindu dharma on campus. Notably, HSC awarded the Chapter of the Year award to Rutgers University for their dedication to Hindu work on campus during COVID-19, especially hosting the Understanding Hinduphobia Conference. HSC awarded the Senior Shakti Award and Senior Dharma Award to Nidhi Iyanna and Dhruvil Shah, respectively, Co-Presidents of HSC’s University of Pittsburgh Chapter.

Student speakers included HSC leadership from high schools and university campuses, including Harvard University, University of Texas at Dallas, and Lynn Brook High School. The program included offerings of Hindu prayers, recitation of a traditional graduation message from the Upanishads, and a symbolic conferral of degrees to high school and college graduates.

“The Global Hindu Commencement was an opportunity to highlight the contribution of Hindu students to the field of education, as well as celebrate their perseverance, hard work and successful efforts. As an international partner we were able to bring this event to our region of the world and help connect Hindu students globally,” said Murali Magesan, President of Hindu Youth New Zealand (HYNZ).

Founded in 1990, Hindu Students Council is North America’s largest pan-Hindu youth organization. HSC is a 501(c)3 non-profit providing a safe space for Hindus on campuses all over and is a platform for young Hindu leaders to learn, grow and engage in advocacy, empowerment and seva. Over 200,000 students of various backgrounds have attended HSC’s programs since its founding.