Reflections on the Swastika 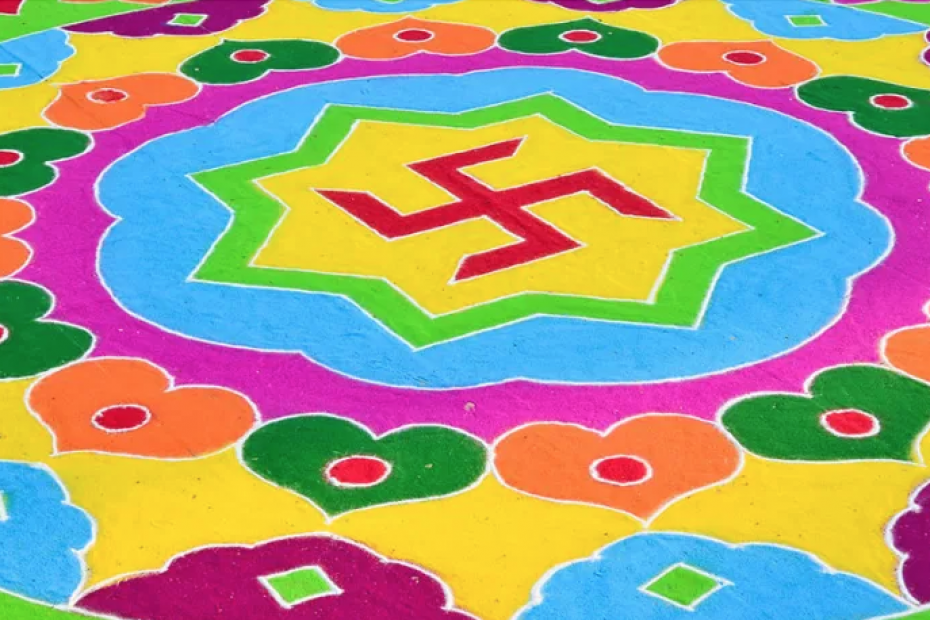 In August 2019, New York State Senator Todd Kaminsky introduced a bill to the state Senate that would require New York schools to teach that the swastika is a symbol of hate. As of this writing, the bill has passed the New York Senate, but has yet to pass the New York Assembly. Notably, many in the Hindu community have asked that the state legislature reconsider this move, as it would have a significant negative impact on the Hindu community. More recently, the town of Swastika, New York voted to keep its name after a cyclist suggested it change. Residents of the town, World War II veterans among them, have expressed that their town’s namesake is a symbol ensconced in positivity, that their town and its name far predates Nazi Germany, and that they see no reason to change the name. This blog post was inspired by these recent events in New York State; it’s as good of a time as any to express what the swastika means to our community.

As a Hindu American, the swastika was something I grew up with. Like the Om symbol, the Trishul, and various murties, it was infused with the kind of symbolism I associated with my tradition and community. It comes from the Sanskrit su, meaning good, and asti, meaning to be, with swastika then roughly translating to ‘to be well’ or ‘good fortune.’ The four arms symbolize, among other things, dharma, artha, kama, and moksha. The swastika also symbolizes the sun and the life it brings us. Hindus use the swastika to adorn doorways, cars, and books, as a way to encourage good fortune. You’ll see it in the doorway of some temples, and it’s sometimes used in ceremonies welcoming newborns into the world. During Diwali, some families will use it to decorate in front of their doors. For me, the symbol brings positivity and comfort, and from a spiritual sense, it makes me feel at home and at ease.

It was only later that I came to know that the swastika was associated with Hitler and the Nazi regime and that it was popularly understood in the west as a symbol for anti-Semitism and genocide. I was deeply taken aback that this revered, auspicious symbol was being co-opted by white nationalists. I came to understand that because of this, you couldn’t display a swastika without serious social costs. In college, a friend told me a story of how her family conducted a puja that involved marking the outside door frame with a swastika, and how some man off the street saw it and harassed them until they took it off, even when they tried to explain that it was not a Nazi symbol of hate, but a Hindu symbol that has had positive meaning for millenia. This story and the state of how society sees the swastika didn’t sit right with me. Why should our community have to restrict ourselves regarding use of our own symbols because of what the Nazis did? I recognize that Nazi Germany represents unfathomable pain to the Jewish community, and that even if the swastika was misappropriated, it may still be a sensitive issue for our Jewish friends and neighbors. That being said, it’s a symbol that holds an important meaning for us, and we should be able to use it without misunderstanding.

Recently, I’ve learned that the story is even more sinister than that. Hitler never actually appropriated the swastika. He might not have even known about the swastika. The infamous Nazi symbol is actually called the Hakenkreuz, German for “hooked cross,” which Hitler presumably saw as a boy at Lambach Abbey, a Christian monastery. He mentions singing in the choir at the abbey in Mein Kampf.

The following is an excerpt from Mein Kampf, where Hitler describes the Hakenkreuz and how it came to be the Nazi symbol. The emphasis and highlighting are mine:

Nowhere in this passage is the word swastika even mentioned. The symbol is referred to as the Hakenkreuz. However, if you paste the above passage into Google translate, you’ll find that it gets mistranslated as swastika. Why is that?

The reason society refers to the Hakenkreuz as the Swastika is thanks to an Evangelical priest, James Murphy. Murphy translated Hitler’s Mein Kampf to English, and he chose to translate the German Hakenkreuz to swastika instead of hooked cross. In other words, even though Hitler’s atrocities and anti-semitism were rooted in Christianity*, Murphy deliberately mistranslated the name of the Nazi symbol so as to disociate these horrors from Christianity and foist them on the Hindu, Buddhist, and Jain communities. Here’s the passage in the Murphy translation of Mein Kampf corresponding to the passage above, emphasis and highlighting are mine:

I myself was always for keeping the old colours, not only because I, as a soldier, regarded them as my most sacred possession, but because in their aesthetic effect, they conformed more than anything else to my personal taste. Accordingly I had to discard all the innumerable suggestions and designs which had been proposed for the new movement, among which were many that had incorporated the swastika into the old colours. I, as leader, was unwilling to make public my own design, as it was possible that someone else could come forward with a design just as good, if not better, than my own. As a matter of fact, a dental surgeon from Starnberg submitted a good design very similar to mine, with only one mistake, in that his swastika with curved corners was set upon a white background.

After innumerable trials I decided upon a final form – a flag of red material with a white disc bearing in its centre a black swastika. After many trials I obtained the correct proportions between the dimensions of the flag and of the white central disc, as well as that of the swastika. And this is how it has remained ever since.

Note that Murphy uses swastika, the name for the auspicious Hindu, Buddhist, and Jain symbol, as a translation for Hakenkreuz, even though Hitler himself never referred to it as such.

Consider the highlighted portions above. Hitler says “Hakenkreuz mit gebogenen Haken,” or “Hooked cross with curved hooks,” which Murphy mistranslates to “swastika with curved corners.” This is the smoking gun. Hitler explicitly indicates that he thinks of the Hakenkreuz as a hooked cross, and compares it favorably to a similar symbol where the hooks are curved. In spite of this, Murphy deliberately mistranslates Hakenkreuz as swastika.

For all the evil deeds for which Hitler is responsible, stealing the Swastika and making it into a symbol of hate is not one of them. The credit for this dishonesty, which has affected generations of two religious communities, goes to James Murphy. The Nazi Hakenkreuz was a symbol of anti-Semitism and white supremacy, while the dharmic swastika stands for peace and prosperity.

It would mean the world to us for us to be able to freely use our symbol in ceremonies and for good fortune without worrying about misunderstandings, as we have for millenia. When you see a swastika in front of a Hindu home or mandir, please know the symbolism and intent behind it — we’re not Nazis! Further, to our friends and allies, if you could stop referring to the Nazi symbol as the Swastika and instead correctly refer to it as the Hakenkreuz, and if you could also correct others when they misuse the term Swastika, many of us in the Hindu community would appreciate it.

*Evidence of Hitler’s anti-Semitism, racism, and general worldview being rooted in Christianity can be found throughout Mein Kampf. See, for example, the following passages, taken from the Murphy translation:

rest of the world: that is to say, their relation with non-Jews. But the Jewish religious

problems, and very petty ones at that. In regard to the moral value of the religious

from the Jewish side; for whatever the Jews have written on this question has naturally

Jews have in a light that makes it look very uncanny to the Aryan mind. The Jew

himself is the best example of the kind of product which this religious training evolves.

thousand years ago. And the Founder of Christianity made no secret indeed of His

estimation of the Jewish people. When He found it necessary He drove those enemies of

the human race out of the Temple of God; because then, as always, they used religion as

a means of advancing their commercial interests. But at that time Christ was nailed to

the Cross for his attitude towards the Jews; whereas our modern Christians enter into

Jewish votes. They even enter into political intrigues with the atheistic Jewish parties

against the interests of their own Christian nation.

own doctrine, but in the unrelenting and fanatical proclamation and defence of its own

How devoid of ideals and how ignoble is the whole contemporary system! The fact that

the churches join in committing this sin against the image of God, even though they

continue to emphasize the dignity of that image, is quite in keeping with their present

activities. They talk about the Spirit, but they allow man, as the embodiment of the

Spirit, to degenerate to the proletarian level. Then they look on with amazement when

morally degenerate also. To balance this state of affairs they try to convert the

Church. While our European people, God be praised and thanked, are left to become

the victims of moral depravity, the pious missionary goes out to Central Africa and

primitive and backward–people will be transformed, under the name of our ‘higher

civilization’, into a motley of lazy and brutalized mongrels.