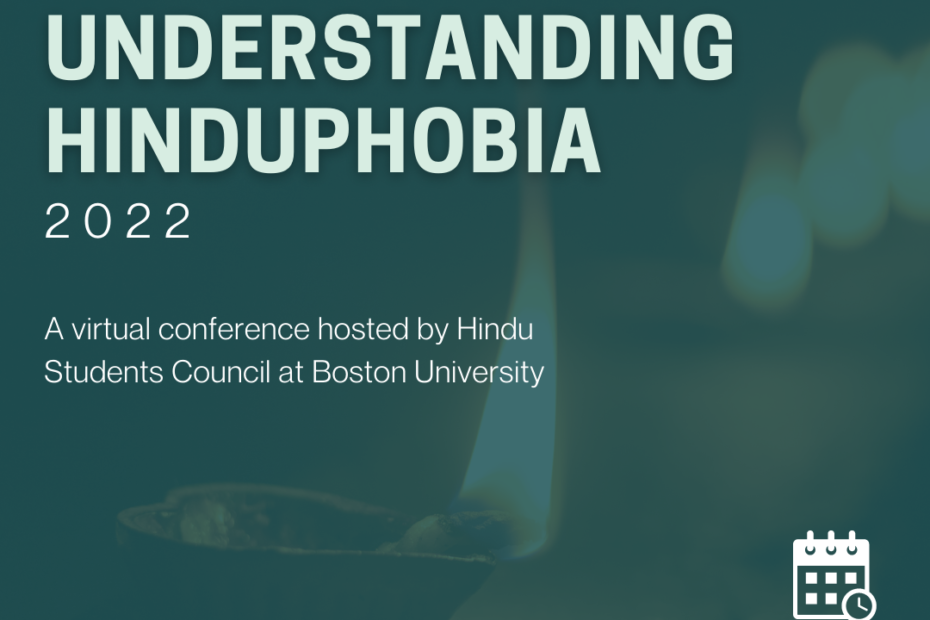 On Sunday, April 3, Hindu Students Council (HSC) hosted the second annual “Understanding Hinduphobia” conference at the HSC chapter at Boston University. The conference is an ongoing collaboration with the Understanding Hinduphobia initiative, a first-of-its-kind academic endeavor to recognize, define, and explore Hinduphobia as a form of bigotry faced by the Hindu American community. Hundreds registered for the conference, which was attended by students, scholars, university administrators, community members, and allies. Notably, former New Jersey Attorney General John Farmer, who combated the anti-Hindu “Dotbuster” gang during his tenure, powerfully exemplified allyship towards the Hindu community, during the final conference session.

Through the conference, both Hindu Students Council and UH’s co-directors tried to zero in on the conversation around Hinduphobia on North American campuses. This year’s sessions incorporated presentations and panels from Hindu American students, exploring how Hinduism’s pedagogy can be more accurate inside and outside of academic spaces, statistical and economic analyses of Hinduphobia in textbooks and on social media platforms, and the religious persecution of indigenous Kashmiri Hindus, Bangladeshi Hindus, and Sindhi Hindus. Boston University’s Hindu Chaplain Pandit Sanjay Saxena also attended and delivered remarks in support of Hindu students at Boston University.

HSC students both contributed towards and were deeply impacted by the conference. Those who presented were thrilled by the opportunity to produce research that delved into a topic they cared deeply about. “I was excited to present our latest report on anti-Hindu disinformation using machine learning,” intimated Rutgers HSC External President and current Network Contagion Research Institute (NCRI) analyst Prasiddha Sudhakar. “We leveraged computational social science research with historical hatred to better understand its modern-day manifestations.” Many were also seeing a thoughtful, cohesive analysis of Hinduphobia for the first time. “It was incredibly impactful for HSC students to listen to solid scholarship and research conducted by academics and their peers on the topic of Hinduphobia,” opined Sohini Sircar, Chairperson of Hindu Students Council’s Board of Trustees. “The conference lifted up the voices of those who have been silenced, and brought awareness to Hinduphobia.”

The conference has certainly set the stage for further work to be done within the Hindu community to combat Hinduphobia, but also provided a valuable framework that can be used by scholars and community activists alike. “It is humbling to see how much Understanding Hinduphobia has evolved in just one year,” remarked UH co-director Dr. Indu Viswanathan. “What began as a collaboration between Hindu American scholars and students on one campus [Rutgers] has grown into an ongoing initiative on campuses across the nation, rooted in a shared understanding of Hinduphobia.” “I’m excited to see our community— especially young people— seriously interested in studying and analyzing Hinduphobia,” added Dr. Parth Parihar, also a co-director and a member of HSC’s Board of Trustees. “When young people go from consumers to producers of knowledge, that signals a major shift— and I can’t wait to see the results.”

The full video of the Understanding Hinduphobia Conference is now available at Hindu Students Council’s YouTube Channel! Below are some highlights from the conference.