This past October I was blessed to start my quest to visit all 108 (106 on Earth) Divya Desams by completing fifteen in a one day visit to Kanchipuram, a town in the Indian state of Tamil Nadu. This post is part one of what I hope will be an ongoing series of my visits to these temples. I intend this post to be a travel guide combined with some interesting tidbits and history of these temples.

Divya Desams. They refer to the 108 temples dedicated to Lord Vishnu, a Hindu god, and are praised by Azhwars in the 4000 Tamil verses which are part of the Divya Prabandham. 105 of them are spread across India, one in Nepal, while the other two are for the afterlife.

You lost me again. Who are Azhwars?

Azhwars were Tamil poet saints whose hymns in praise of Vishnu are composed and collected in the Divya Prabhandam. There were 12 of them. While their actual period of existence is unknown, they’re supposed to have lived between the 5th and 10th century CE.

Go on. You were telling?

Yes. I set off to Kanchipuram on a Friday morning. You can avoid crowds on weekdays. A direct train on the beach route, from Guindy to Tirumalpur will take you to Kanchipuram east. This journey is around 2 hours and if you’re lucky like I was, you might end up having interesting conversations with your fellow passengers. I reached there by 10 am and I had enough time to visit all the shrines before the last train back at 7 pm.

I engaged an auto (3 wheeler) from the stand outside the station. The driver, an affable guy named Shiva, assured me that I’d have completed my target by sunset. Over the course of the day, he not only kept his word, but earned a friend as well.

Most of the temples in this region were built by the Pallavas, who were a relatively minor dynasty in comparison to the triumvirate of Cholas, Cheras and Pandyas who dominated the southern part of India. A couple of them were built by the Cholas as well.

It is quite a humbling experience to walk through these temples, which were built over a 1000 years ago, having inscriptions in languages like Tamil and Sanskrit, which are thriving to this day.

We started off with Sri Vaikunda Perumal Temple. The distinct temple architecture struck me immediately. I had a quick darshan due to the lack of a crowd, and walked around absorbing the greenery around the premises.

Mentioned in Prabhandam by – Thirumangai azhwar.

Probably the only “dual” Divya Desam. Both Pacha Vannar and Pavala Vannar constitute a single Divya Desam and they’re right across each other. As you might have guessed, the names refer to Vishnu’s color in various yugas – Pavalm (emerald) & Paccha (green). I noticed that the temple kolam (tank) was in a pretty bad state, a sight which I encountered more than once in the temples I visited that day.

HUGE is what comes to your mind on visiting this shrine. One of the oldest temples in Kanchipuram, the sanctum sanctorum encompasses Krishna (an avatar of Vishnu) in his Vishwaroopam (universal form) in a sitting pose. You can read about the legend of this temple in the photo below. 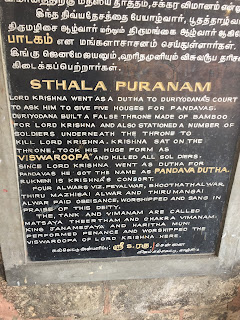 The next four Divya Desams are all housed under one complex.

Few sights make you feel as diminutive as looking at Narayana in his Vishwaroopam. In this shrine, we see the Vamana avatar (one of 10 avatars of lord Vishnu) in his universal form, with his left leg at a right angle and parallel to the ground, and the right on Mahabali’s head, symbolic of his two steps to measure the two worlds and asking Mahabali where he should place the third. Hence the name “Ulagalantha” which means, one who measured the world.

This and the other two shrines within this temple were most likely brought to the temple complex due to their own temples being destroyed or damaged due to natural circumstances. Karunakara perumal is representative of the clouds which bring rain and fertility to the earth.

Continuing with the theme of clouds and rain, Thirukarvanam represents the life giving properties of water.

Rounding up on the last of the water-trinity is Thiru Neeragam. Like the other three, it was relocated and placed around Thiru Ooragam. 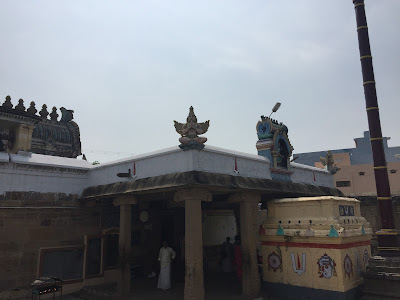 The uniqueness of this temple is that it is housed within a temple dedicated to Lord Shiva, the Ekambareshwarar temple.

“Nila” means moon in Tamil, and the legend goes that Narayana appeared as a moon during Parvati’s (Shiva’s consort) penance. The temple itself is massive, with one of the tallest gopurams (gate tower) I’ve seen. 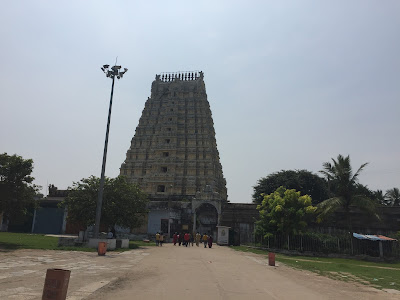 I was looking forward to visiting this shrine as the deity was our “family deity”. However, I struggled to locate Him, as the main presiding deity was dedicated to Goddess Kamakshi. After enquiring around, I learnt that He should be seen via a reflection in a mirror. A pleasant surprise indeed.

Phew! Can we take a break for lunch?

You don’t have a choice. Temples are typically closed from noon to 4 pm. Shiva and I had a hearty vegetarian meal at Saravana Bhavan and discussed how we can spend the buffer time we’ve. He offered to take me to a silk saree store. Kanchipuram is famous for it’s silk sarees (Indian traditional/regular attire), and I felt I could take a look and get a couple for my mother.

The store owner welcomed us and displayed a variety of sarees. The familiar personal connection you find with people from small towns in India was on full display here. The sarees themselves were exquisite, each one uniquely handcrafted to perfection. I enquired more about the process of making these sarees, and was lucky to be escorted upstairs, where I got to see the craftsman in action, threading unique patterns using what looked like a complex contraption, but handled with ease.

We still had plenty of time before the temples would be open again. We decided head out to Thiruputkuzhi, as it was a half an hour drive from Kanchipuram. Along the way Shiva told me about his family and his political views. I told him about America and what I miss about India.

Temples are some of the best places to take rest. The cool stone thinnai’s (porch?) provide a comfort few resting areas can match. I had a good nap there.

The most handsome form of Vishnu I saw that day was at Thiruputkuzhi. He’s said to have performed the last rites and granted moksha (liberation) for Jatayu. Boodevi and Sridevi (his consorts) are at a slanted angle, which the priest said was to protect Him from the heat. 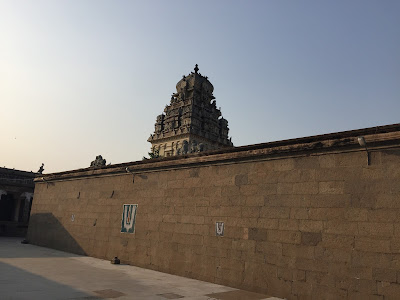 The highlight of the day was of course the Varadaraja Perumal temple, the most famous in Kanchipuram. Set in a huge area of close to 23 acres, it is an impressive place of worship and architecture. I loved this temple and its premises.

Sri Varadaraja Perumal was a magnificent sight to behold and the golden and silver lizards situated on a panel at the roof of the temple, added to the allure of the temple. 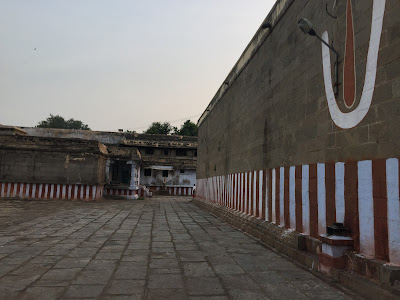 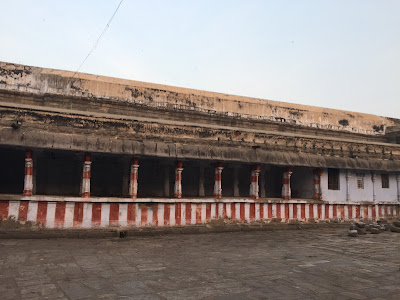 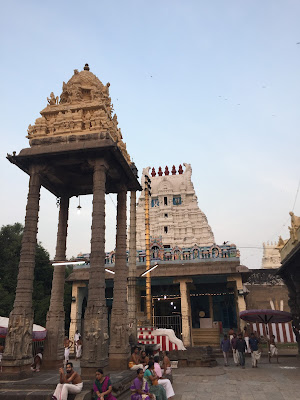 Also known as “Sonna Vannam Seitha perumal” , one who does what was asked of him, it was the first time I saw Narayana lying on Adisesha (giant snake) in the opposite direction (right to left). The temple premises were beautiful as well, with the processions going on adding to its charm. The temple is also known to be the birthplace of Poigai Azhwar, born in a pond nearby. 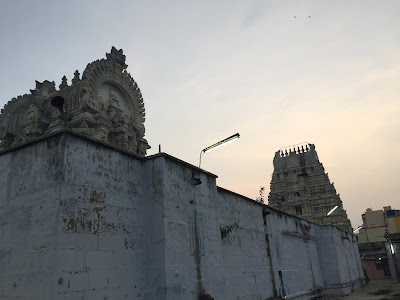 Located very near Sri Yathothakaari Perumal temple, the Lord here has 8 hands, holding different weapons in each of them.

It was getting dark by now. After stopping by for a quick sip of tea, we continued to Thiru Velukkai. Here He is in his Nrsimha avatar, as Yoga Nrisimar. 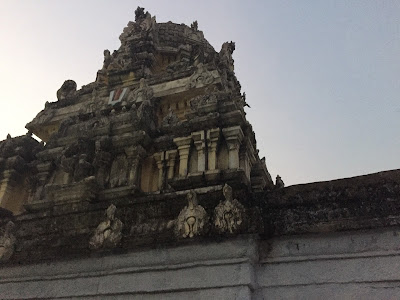 The last stop of the day was at Thiruthanka. “Deepa” means light and in this temple, Vishnu appears as light overcoming darkness. Since it was late, the gates were closed, but I did manage to get my darshan from outside. He is also known as “Vilakku Oli Perumal”, again translating to one who gave light.

This temple is said to be the birthplace of one of the greatest polymaths of India, Vedanta Desika. He was an ardent devotee of Sri Deepa Prakasar, and a shrine is dedicated to him in this temple. 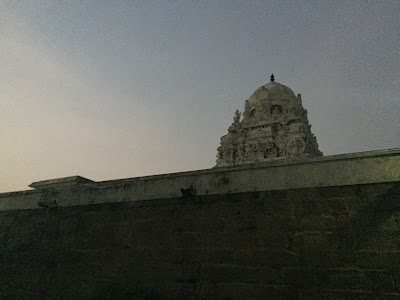 That was the end of my temple trip. Although it was exhausting, it was a very fulfilling experience. It also gave me the belief that I can achieve my target of 106 in the next couple of years. I bid goodbye to Shiva, and I hope to meet him again soon.