[vc_row][vc_column][vc_column_text]May 28, 2018. Walden, NY. The annual HSC collegiate camp was held recently in Shanti Mandir Walden, NY during the Memorial Day weekend with contagious interest and enthusiasm shown by students and young adults. The theme for this year’s conference was ‘Exploring Symbols in Hindu Rituals and Practices’.

The first evening of the camp saw the icebreaker session where first time participants and camp regulars gathered to know and greet each other. The camp attendees played an innovative game called Ultimate Rakshasa, which was an Indic themed version of the popular game Mafia. 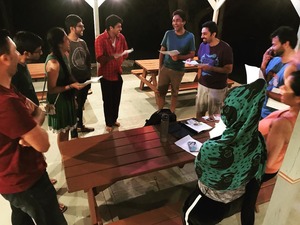 The following day started with a refreshing yoga session in the morning led by the former HSC President Ravi Jaishankar that set the tone for rest of the camp activities. Ravi also taught various pranayama techniques over the course of three days. 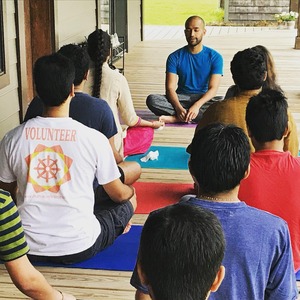 This was followed by an inspiring talk by Ghanashyamji from Bhakti Center, NY who spoke about ‘Symbolisms in the Bhagavatam’. This session gathered lot of interest from the participants and there was a lively Q&A session post the talk. He also followed up with a lunch debate session where the attendees explored the deep philosophocal meaning hidden within the Mahabharata. 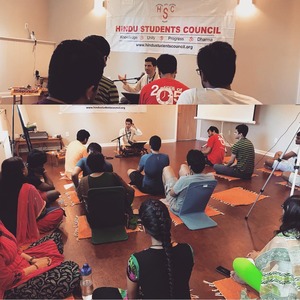 The post lunch session included an insightful talk by Pt. Vipulbhai Patel from Gayatri Parivar, who spoke on the Symbolism in ‘Hindu Marriage Rites’. This session also had lot of engaging interactions between the speaker and audience and helped to address some of the clarifications that participants had concerning certain customs and rituals. There were also discussions on the impacts of inter-caste and inter-racial marriage, which resonated really well with the young audience.

The evening session included ‘Dancing Kirtan’ that was hosted by Gurudev Swami Nityananda that provided for a unique experience of combining bhakti and physical wellbeing. The volunteers who live at ashram and the HSC camp members attended this event and had a lot of fun dancing. 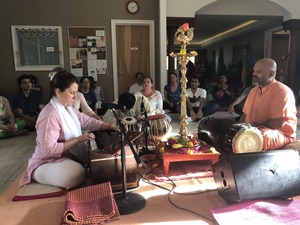 After the kirtan, there were host of games based on Dasavathara. This brought out the competitive spirit amongst the young adults and provided an excellent opportunity for team bonding. The day ended with Abhishek Desikan’s (member of HSC’s leadership team) presentation about ‘Divya Desams and Symbolism in Hindu Temples’ that provided an opportunity for the participants to learn about the architecture of temples in south India and also about the various problems Hindu temples in India face and the means to overcome them.

The following day started again with yoga and following this there was a session hosted by the Chairman of HSC, Nikunj Trivedi on ‘Varna and Jati Systems’. This presentation spoke in detail about the concept of caste the impact of colonial rule on the system. It also touched upon how current caste faultlines prevalent in India are used by Breaking India forces to push forward their agenda. Just like other sessions, this involved lots of interactions between the speaker and the audience and provided an opportunity to reflect upon some of the facts that are misrepresented in the mainstream.
After the lunch session, the HSC team had a chance to meet with Swamiji in person at the ashram. He spoke on the need to defend the dharma in the current age and commended HSC for its activities in the country. Following this, there was a video session hosted by Dr. P.R. Mukund (Professor, Rochester Institute of Technology) – (forgot the topic) that was well received by the crowd. The day ended with board games based on Mahabharata characters created by Parth Parihar, which once again provided an opportunity for the members to bond and engage with each other.

The final day of the camp saw a session hosted by Vivek Desai who is based out of the ashram itself on ‘Lord Shiva’s Symbolism’. This talk also touched upon the various aspects of Kashmir Saivism – the sampradaya that the ashram follows. 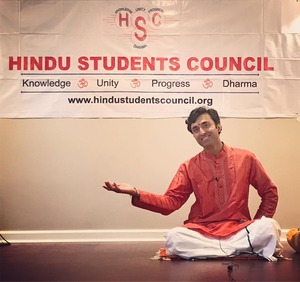 The camp concluded with a call to help with fundraising and volunteering opportunities within HSC by Arnav Kejriwal (Secretary, HSC) and Sohini Sircar (Treasurer, HSC) and closing surveys to get feedback about the camp.

Overall, the camp provided an opportunity for the young adults to meet and discuss about the pressing issues concerning Hindus and the need for activism in order to serve and protect the Dharma. Various events and sessions at the camp also gave ample intellectual ammunition and a renowned sense of purpose and vigor for the cause. HSC could not have chosen a better place than Shanti Mandir whose serene ambiance, sattvik food, green environ provided a perfect spiritual abode for the retreat.[/vc_column_text][/vc_column][/vc_row]