HSC on the Murder of George Floyd – Black Lives Matter 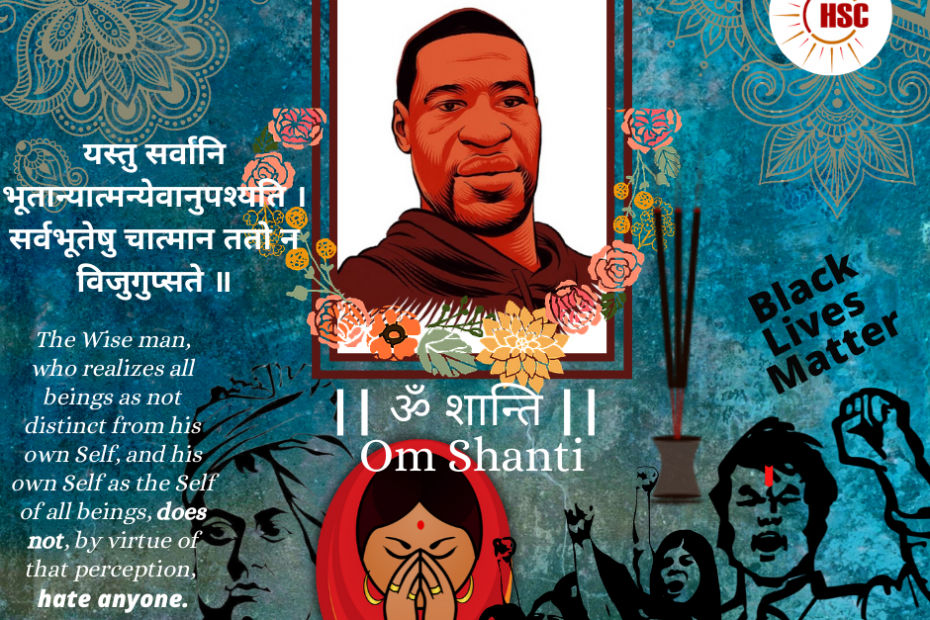 This moment of trauma for the African American community, culminating in the murder of George Floyd by a Minneapolis police officer, calls upon each and every one of us to stand shoulder-to-shoulder with our black brothers and sisters in demanding both accountability and systemic change from law enforcement, the political class, and the broader society in which we live. Floyd is but the most recent in a tragic list of victims whose lives were cut short merely because of the color of their skin. We also wish to acknowledge that this systemic racism impacts a large but overlooked segment of our own community; over 30,000 of the 1.5 million practicing Hindus in the U.S. are African American.

Hindu Students Council’s vision statement is guided by a powerful three-word excerpt from the Hindu epic, The Mahabharata:

Dharma protects those who protect it

It is clear that protecting dharma (which literally means that which upholds or sustains) means fighting for the ability of all people—regardless of their ethnicity, gender, race, or sexual orientation—to enjoy the same freedoms as we do without fear of physical harm. This is precisely what permeates Bhagavan Sri Krishna’s exhortation to Arjuna in the Bhagavad Gita— it is Arjuna’s duty to fight because his fight is against adharma, even if perpetrated by his own family.

As Hindu students, we are also guided by the Hindu ideal of samadarsana—seeing all living beings with the same compassion. The sixth verse of the Isopanisad states,

The Wise man, who realizes all beings as not distinct from his own Self, and his own Self as the Self of all beings, does not, by virtue of that perception, hate anyone.

While we do not wish to appropriate the African American experience in this deeply painful moment as some others deplorably have, we feel obligated to remind our fellow Hindus that when Hinduism touched down on U.S. soil in the form of Swami Vivekananda in 1893, it, too, was met with racism. The Civil Rights movement of the 1950’s and 60’s was deeply intertwined with the struggle for independence in India. The Immigration Act of 1965 through which many of our families were able to immigrate to the U.S. was made possible only by the Civil Rights movement. Last month, Hindus across the globe wept together after Hindu sadhus were mercilessly beaten to death by a mob, aided and abetted in murder by the police, in Palghar, India. Try to imagine the pain of a community that has had to endure this again and again and again. All this is to say to our African American brothers and sisters that while our experiences may be different, we recognize that the destinies of our communities are intertwined; we owe much to and have benefited from your struggle. Allyship must be our dharma.

Hinduism’s fundamental teachings call upon us to live out these ideals and meet this moment. Dharma has never been protected by sitting on the sidelines. As members of diverse campus and work communities, Hindu Students Council resolves to follow our dharma and fight for the basic right of each person to proudly live out their identity.

We urge our students: do not let physical distancing be a barrier to keep you from serving your communities. Reach out to your friends and colleagues of all backgrounds. Be a source of comfort. Be a source of support. Seek out the opportunity to be of service. Always speak out for dharma.