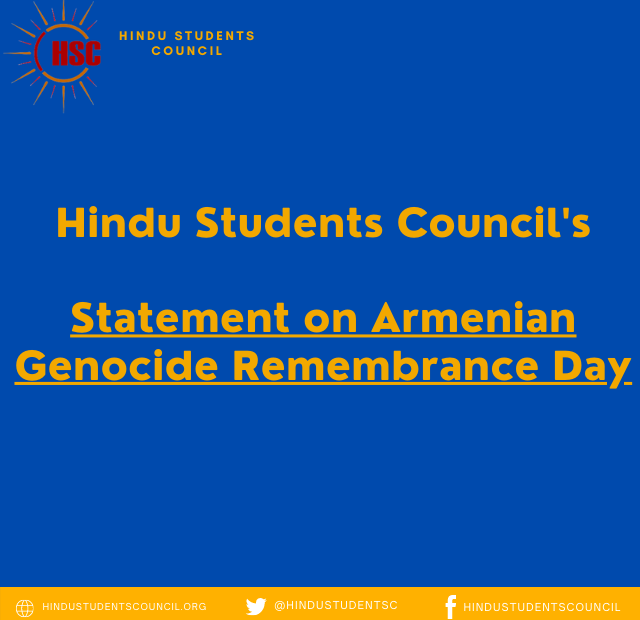 For more information on the history of the genocide, please visit https://anca.org.

This year is the 106th anniversary of the Armenian Genocide, and it is incumbent on all of us to know the facts of this atrocity. In the early 1900’s, the Ottoman Turkish Government ethnically cleansed over 2 million Christian Armenians, Greeks, and Assyrians. The victims were taken into the Syrian Desert where they were brought into concentration camps to be killed, raped, or forcibly converted to Islam. Hundreds of Armenian scholars and leaders were imprisoned, and eventually killed, in order to stop any resistance. Armenian children were stolen and placed with Turkish families to further facilitate cultural cleansing.

Over 800,000 displaced Armenians became refugees in different parts of the world and have had no choice but to call those countries their homes for over a century. And yet, even today, much of the world fails to formally recognize the genocide and take a stand with the Armenian people.

For more information on the history of the genocide, please visit https://anca.org.

We deplore any attempts to deny the scale or existence of the atrocities of this genocide. Many in the West stay quiet on the true nature of this genocide in consideration of a political agenda. At Hindu Students Council, it is our dharma – duty – to stand up for what is right.

We thank the President for recognizing the Armenian Genocide on today’s anniversary.

We thank the Armenian National Committee of America and Communications Director Alex Galitsky for their allyship to the Hindu community. We want the entire Armenian community to know that we stand with you in your struggle to recognize this genocide for what it truly was.

Echoing the sentiments of Alex Galitsky, recognizing the Armenian Genocide is important not just for Armenians but for all communities whose genocides have been denied.

Those who serve dharma are protected by dharma