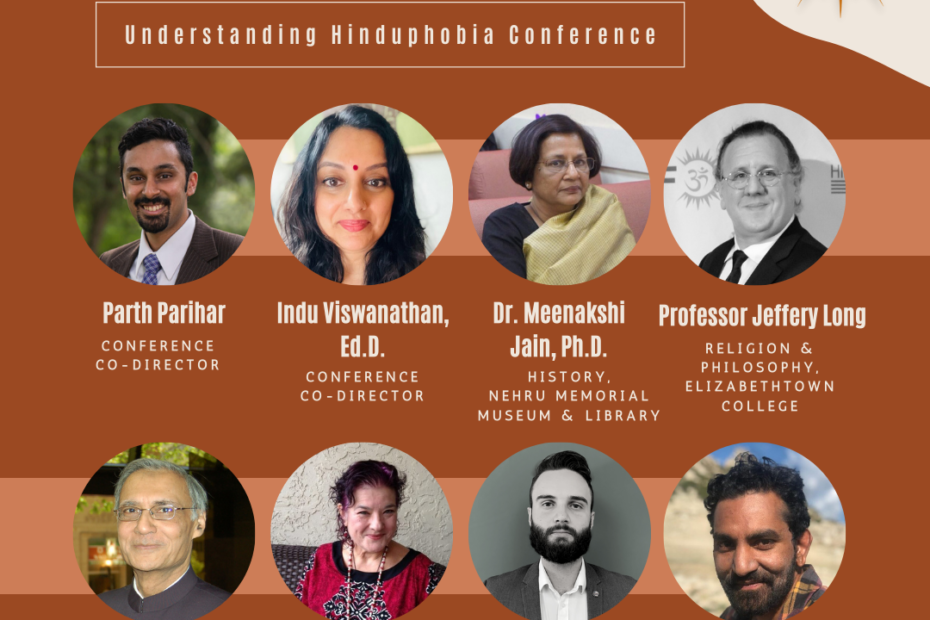 On April 23rd, Hindu Students Council (HSC) at Rutgers University hosted a full-day academic conference entitled “Understanding Hinduphobia”. This was the first ever academic initiative of its kind to recognize, define, and explore Hinduphobia as a form of bigotry faced by the Hindu American community. Over 1000 people registered for the conference, which was attended by students, scholars, university administrators, community members, and allies. Rutgers Chancellor Christopher Molloy also attended and delivered remarks in support of Hindu students at Rutgers.

The program was designed by Dr. Indu Viswanathan (Ed.D., Teachers College, Columbia University), and Dr. Parth Parihar (Ph.D., Political Economy, Princeton University), who built the framework around a working definition of Hinduphobia. Sessions incorporated the historical origins to contemporary manifestations of Hinduphobia, its common and pervasive tropes, the impact on Hindu Americans and Hindu spaces, and the active denial and gaslighting of the religious persecution of Hindus.

The day began with the launch of the working definition, which is based on scholarship and was co-developed by the conference scholars in the weeks prior. After presenting this definition (which is available on https://understandinghinduphobia.org), Professor Jeffery Long, Professor of Religion and Asian Studies at Elizabethtown College, presented a primer on the debates and tensions around the term and the phenomenon. Rutgers Chancellor, Christopher Molloy, who joined the morning session to learn more about Hinduphobia and how it impacts Hindu lives, shared words of support to Hindu students at Rutgers. He remarked, “Dr Long’s presentation really allowed me to learn about the experiences of anti-Hinduism and the harms caused by the ignorance and hatred directed towards the Hindu religion and culture.” He concluded, “I would like to also express my sincere rapport for the many Hindu members of our campus, with my full commitment, to ensure that all students, faculty, and staff are able to learn and work in an environment where they feel fully safe, valued, and respected.”

Other academic presentations were made by Dr. Arvind Sharma (McGill University), Dr. Meenakshi Jain (Nehru Memorial Museum & Library), Dr. Yvette Rosser, Dr. Indu Viswanathan, and Dr. Parth Parihar. Dr. Viswanathan remarks on the magnitude of the Conference: “What is significant about this moment is that we’ve taken a phenomenon – Hinduphobia – and operationalized it through a clearly articulated definition and description. The conference enlivened all of the elements of the definition through historical, sociological, institutional, discourse, and narrative analysis. It served as a kind of blueprint and laid the groundwork for developing a cross-disciplinary canon and allyship, which we’ll continue to build across generations. The impact is not just academic, though! Already, I’m seeing a positive difference in how folks are responding to brazenly Hinduphobic professors across Western academia who deny Hinduphobia.”

Allies to the Hindu community also spoke, including leaders from the Armenian National Committee of America (ANCA), Hillel International, and Global Decolonization Initiative.

The Conference also hosted the graduating President of Rutgers University Student Assembly (RUSA), Nick LaBelle, who talked about the growing prevalence of Hinduphobia and the importance of Rutgers to stand by its students. LaBelle said, “The Hindu community on campus is a proud and vibrant community. I’ve been lucky enough to attend several events by Hindus and we’ve all seen in prior months and weeks that there are some very large gaps among many groups on campus, whether it’s cultural or religious, that we have to do better job of understanding.”

The Conference registrations filled up quickly, reaching 1000 registrants, including students, school administrators, professors, community members, and allies. Administrators registered from universities and high schools across the country, including major campuses with large Hindu populations such as Rutgers, Georgia Tech, Cornell, and other universities.

In the wake of the conference’s global success, HSC and the scholars behind the inaugural “Understanding Hinduphobia” Conference will continue to work towards bringing scholarship on Hinduphobia to more campuses across North America. The full video recordings will be made available on Youtube by Hindu Students Council as well as on the Understanding Hinduphobia (https://understandinghinduphobia.org) website. All presentations are properties of the scholars who presented them, and proper citation is required to circulate their materials.